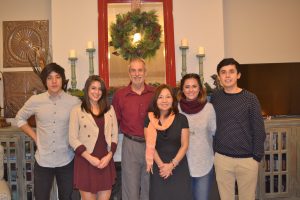 Another year has passed and we are all doing well. We hope you are, too. Even though it was a good year, there were a few sad events. Akemi lost her father in September. He had been in failing health but it was still a shock. We also lost one of my cousins, Pete Reigart, who had also been in failing health. Finally, although my dad passed away two years ago, we finally laid his ashes to rest next to my sister Susan.
Anise drank in the last drops of undergrad life and graduated from UGA summa cum laude in May with degrees in Biology, Psychology and Spanish. A month later we were hauling her and all her stuff down to Miami, FL to begin the long process of becoming a doctor. She was accepted into the University of Miami Med school in their dual enrollment program. She is simultaneously enrolled in the Master of Public Health program and the MD program. That is why she started in June. To pay for all this, she got a full scholarship from the US Navy which she will have to pay back with four years of active duty and two years of reserves after her school and residency. So she is an ensign in the Navy now, too.
Savanna finished one year of undergrad at UGA and decided she had enough of that for now. She also got married in July. She married Jonny Martinez, her High School sweetheart and they are living across town from us so we get to see them fairly often. She is now contemplating her next move towards gaining a higher education. Savanna held down a number of jobs through the year including Manager of the Green Acres Pool for the summer season. Jonny will start working at Hitachi in the new year.
Rio graduated from UGA last December and has spent most of the past year working on various music projects either on stage or in the engineer’s seat. He also still lives in town with a few old friends so we get to see him on a regular basis as well. George, Rio, James Stickney and Marlo Rio’s dog) went out to COlorado in early September. We spent the first four days hiking in the Mt. Zirkel Wilderness in NW Colorado. We scaled Mt. Zirkel as part of that trip. Later we climbed Gray’s Peak and Torrey’s Peak. In between we visited our cousin Cathy and her parents, Johann and Carmen did some day hiking, went to some events, etc.
Akemi is as active as ever, playing tennis, working out, doing yoga and working. She has had a few temp jobs this year mostly translation/interpreting. Most of the year has been spent at Kubota and she will be there through March of 2017.
George is still working at Hitachi Automotive – as the business has grown, so have responsibilities. He kind of went overboard with the cycling this year and rode 7300+ miles which took up a lot of time. That will have to be cut back next year. Part of the enthusiasm was spurred by the purchase of a new ultra-light, all carbon bicycle. He also let go of his old Celica and gave it to Savanna and Jonny. It was replaced with a 10 year old Porsche Cayman S. That has been a blast. He also stepped aside as the Pool President after the season. He will serve on the Board one more year and then leave it to others. Ten years of that is enough. Thinking about some other things to turn his hand to.

We have Rio, Savanna, Jonny and their friends over for dinner most Sundays. We miss having Anise with us, but she does make a cameo appearance now and then. If you are in town, stop by and join us.
We hope you have a great 2017!